Thanks for visiting. I'm Matt and I have been in the the Tech Industry since 2001. My career has primarily been as a full-stack Microsoft.NET developer. I do, however, have experience in other languages such as Java, C++, Python, and PHP and will gladly work with them or any other languages / technologies as I enjoy learning new skills.

On a personal note, I enjoy outdoor activities, sports, and wood working. I will likely address you as ma'am or sir, and not because I think you're old. I also believe in firm handshakes and keeping my word.

Experienced Software Engineer with a demonstrated history of successfully working with the DoD. Skilled in full stack .NET, various web frameworks, and Java.

Part of a .NET agile team creating a web based human risk factors and force preservation application for the USMC and NAVY. Also, developed the UI for a Python / Flask web application concerning Epilepsy drugs and their likely effectiveness given a patient's history.

Lead a .NET team in developing a four part application suite in support of the Army Corps of Engineers and the AFCS program. The application provides construction management features such as detailed plans, reporting, and progress tracking.

Developed learning management software to replace the option currently in use by the Army Corps of Engineers. Features included streaming video, and online payment through Pay.gov

Developed DISA / DIACAP compliant web applications for various clients on Redstone Arsenal in support of AMRDEC. I was also part of internal team that developed coding standards and served as IA liaison to Teledyne Brown during a project DIACAP certification.

I provide all manner of IT services to individuals and organizations across the southeastern US. Some of my larger clients include the Alabama Dental Association, and Auburn University - CADC. 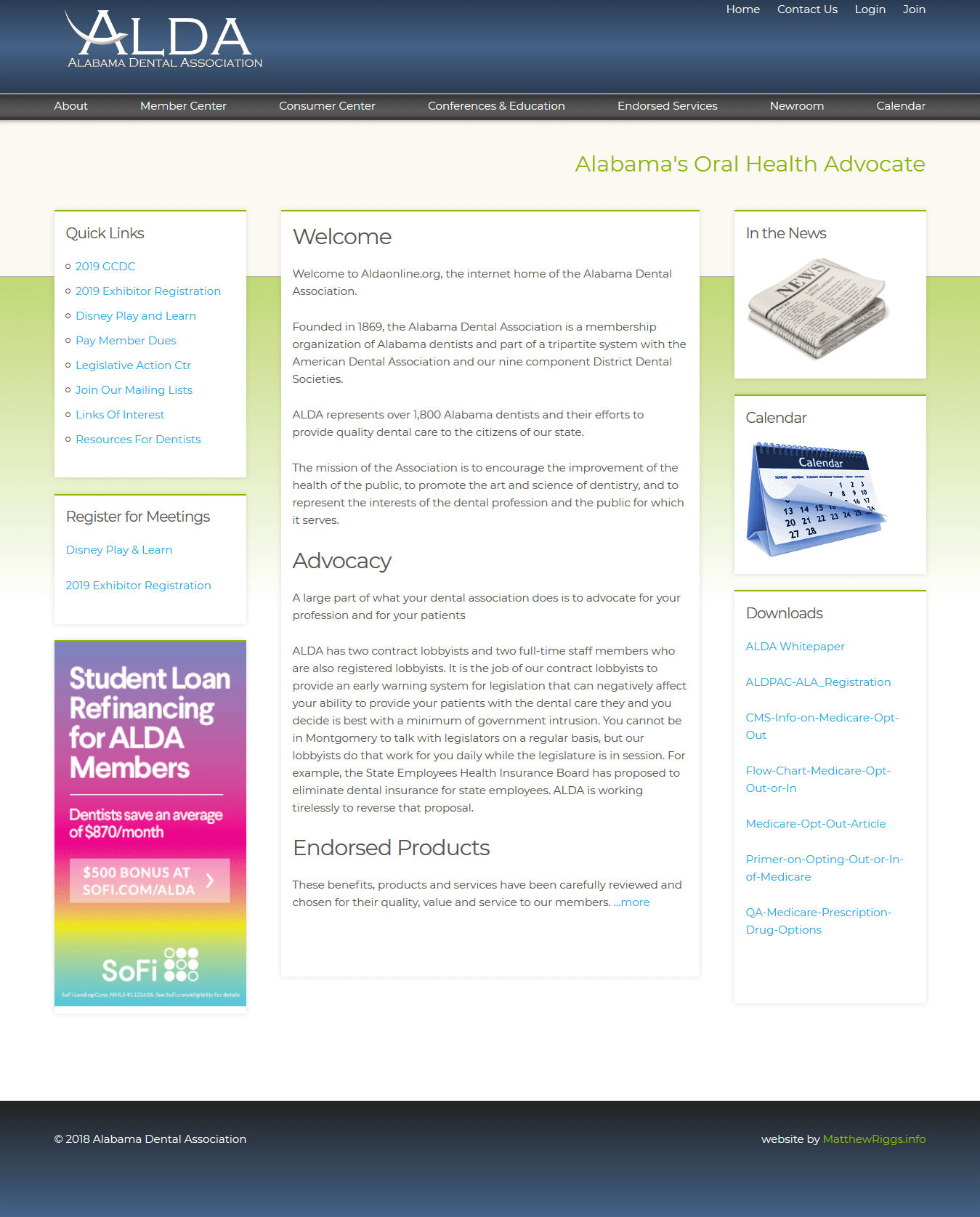 ALDA is a professional association of dentists leading initiatives in advocacy, education and clinical standards. 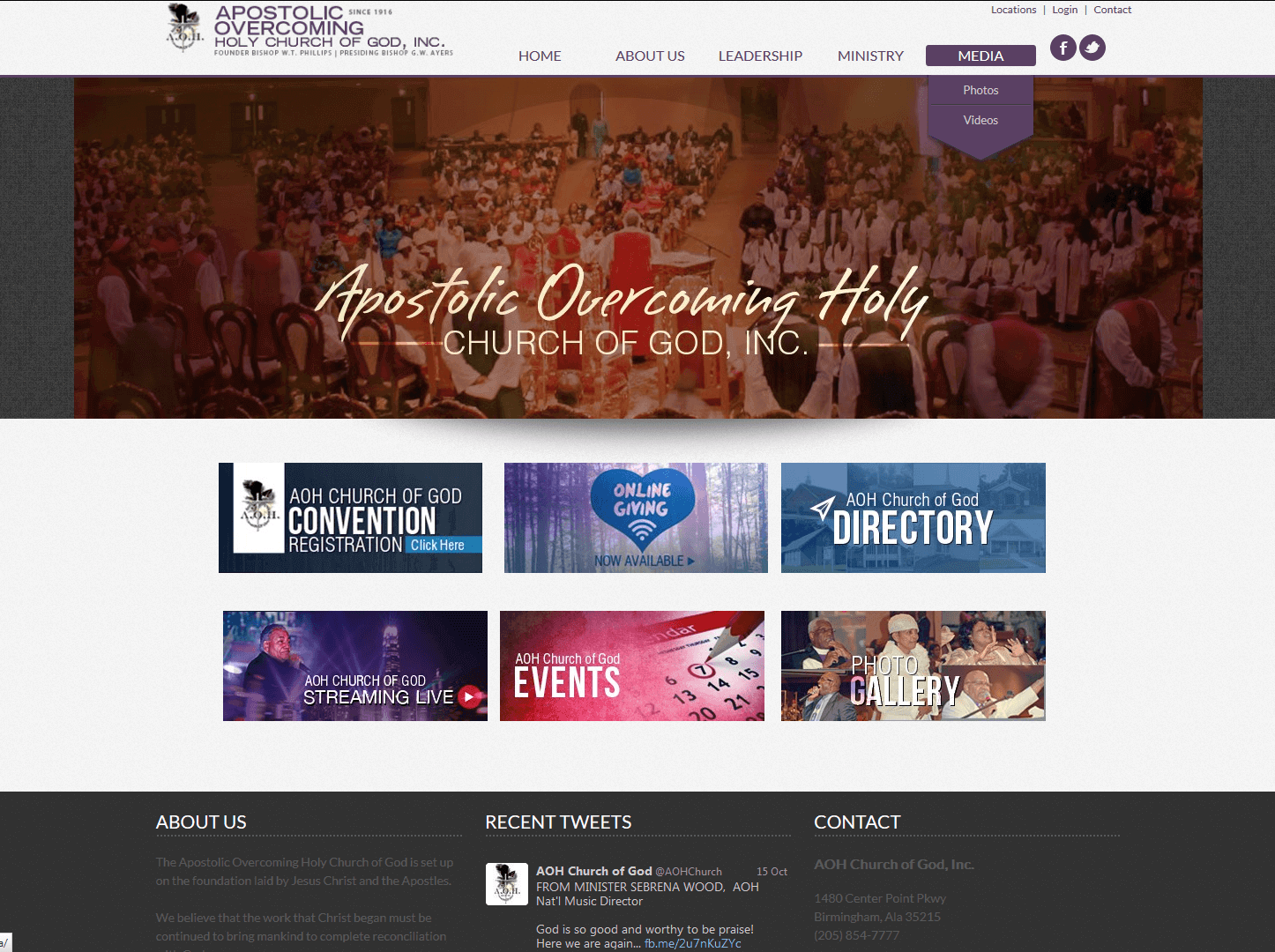 The Apostolic Overcoming Holy Church of God is set up on the foundation laid by Jesus Christ and the Apostles. We believe that the work that Christ began must be continued to bring mankind to complete reconciliation with God. 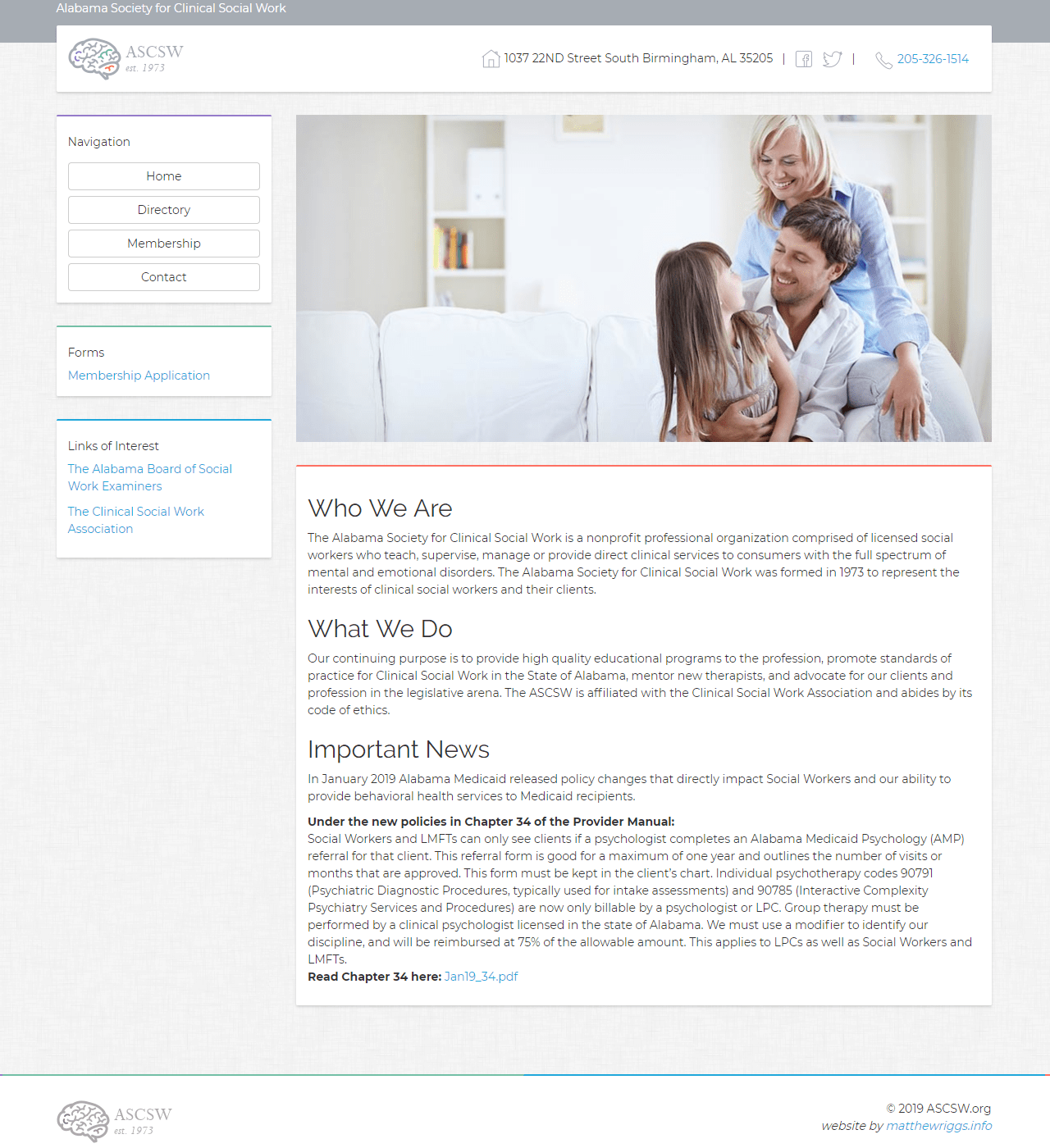 The Alabama Society for Clinical Social Work is a nonprofit professional organization comprised of licensed social workers who teach, supervise, manage or provide direct clinical services to consumers with the full spectrum of mental and emotional disorders. 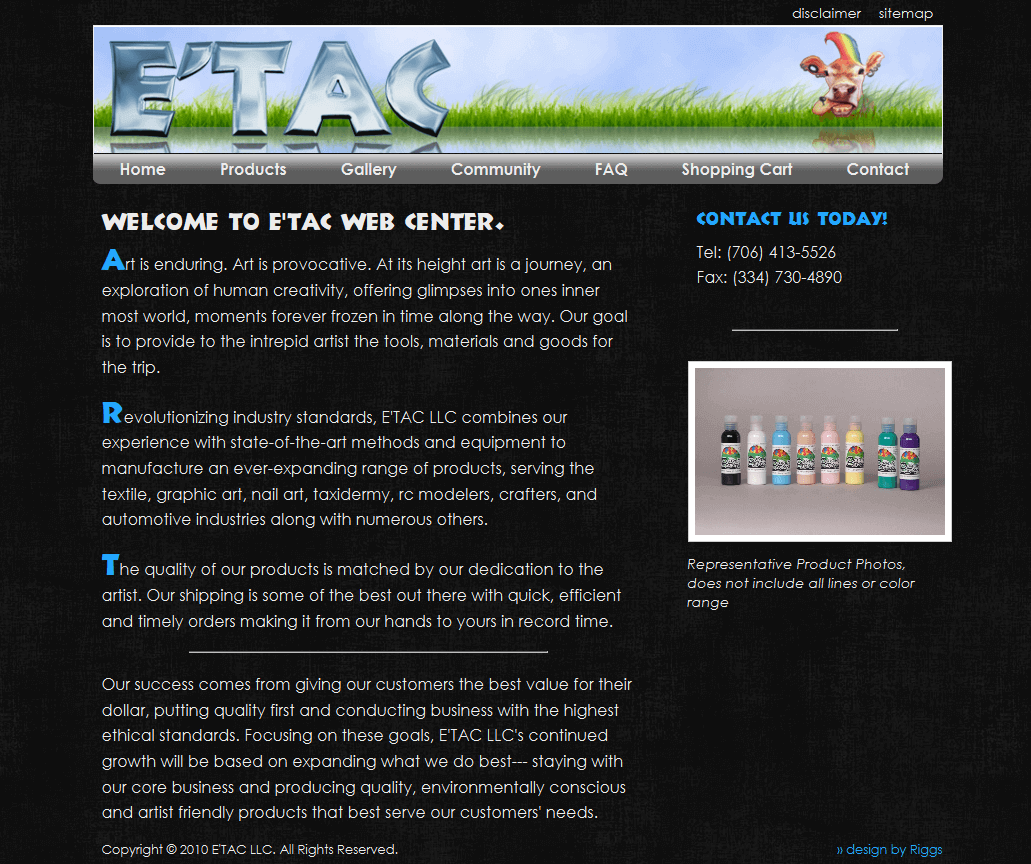 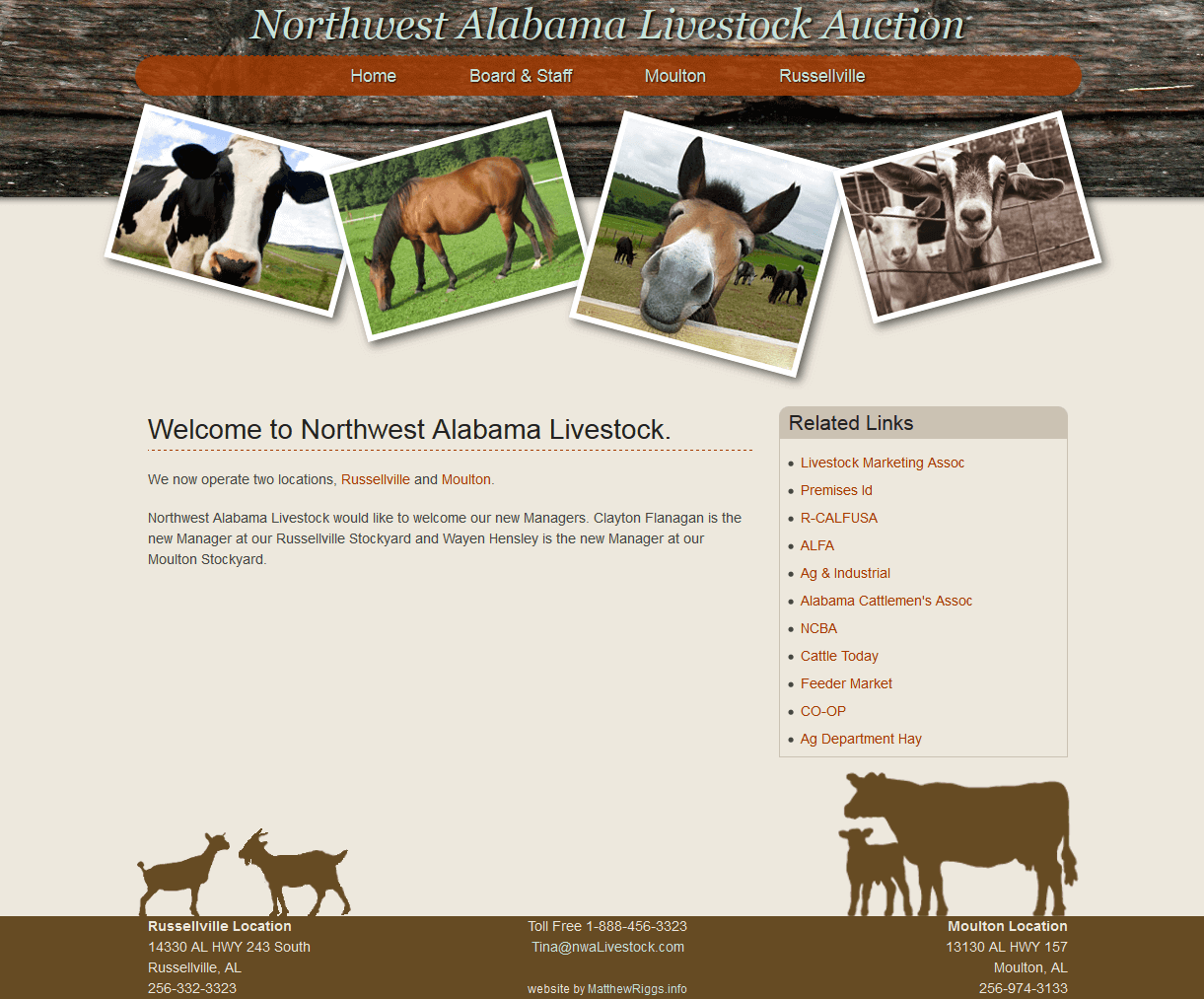 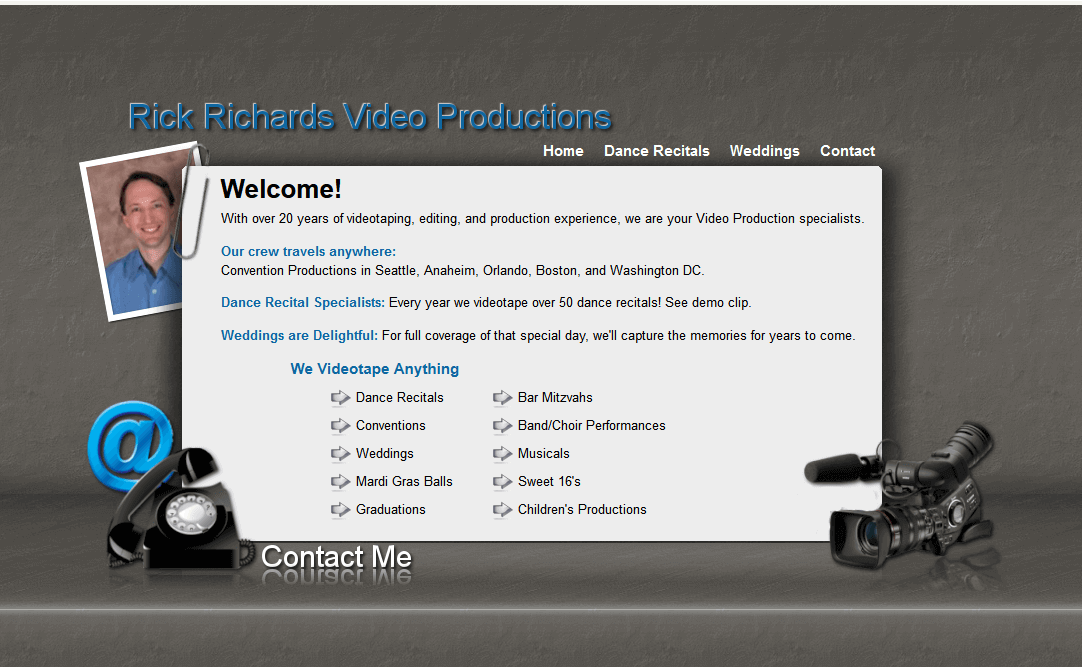 With over 20 years of videotaping, editing, and production experience, we are your Video Production specialists.

Thank you for your work improving this system over the past several months. During the scenario, we had 20 testers using the system consistently for several hours without a single note of system failure or technical hiccup. Your good work is reflected in the successful performance of the system. Thank you again – outcomes like this reflect well on all of us.

US Army Corps of Engineers

I really appreciate all of your hard work. You and your team are rockstars!

Matt did a terrrific job of designing our professional website from scratch! I told him what I wanted it to do for the organization and how we wanted to use the site. He created a site that is easy to access and meets our group's needs. Matt was very professional in his interactions and always helpful. I would highly recommend his services.

Matt has built a very clean professional website for the Alabama Dental Association. His services are fast, professional and affordable. We count ourselves very fortunate to be able to work with Matt and use his IT consulting services for our website. It gave us just the professional presence we were looking for on the web and the cost fit right into our budget. We highly recommend him to any business.

As a unique Art Based business we needed a versatile web site we could build as we grew that included multiple galleries, specific script and was easy to navigate. Upon many attempts to properly get a web site up and running, frustration was setting us back till we met up with Matt Riggs. His experience and dedication was exactly what we needed to kick-start our web presence and provide the perfect business solution for our needs. We found Matt's professionalism and ethics to be outstanding as well as enjoyable to work with.